A Couple Of Side Tables

Tonight, I am going to share a couple of tables I completed last year and never got around to putting on here.

This first one I purchased at a rummage sale at a local senior's center.  My husband teases me for going because it's mostly 'old people' stuff... but you never know what you'll find, right? 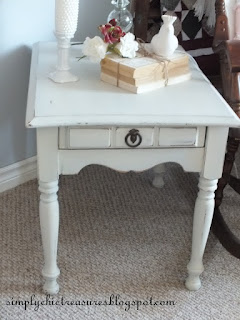 This was a very sturdy vintage maple piece.  I did take a before picture, but I painted this on the same day that my new camera arrived.  My husband got home from work and of course wanted to play around with it.  Next thing I know he's asking me if there was anything important on the card because he had just accidentally erased the whole thing.

It didn't come with a knob, so we added this one.  I enhanced it with a little bit of rub n buff.  I used a little copper and a little black. 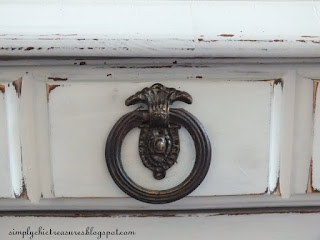 I used MMS milk paint in grainsack.  Now I know it's said that you don't have to sand with milk paint.  However, I find that the more you sand, the more the paint sticks.  I did not want a super-super chippy-paint-peeling-everywhere look, so I gave the table a good sanding, and the paint ended up not chipping that much.  However, it did still distress very nicely. 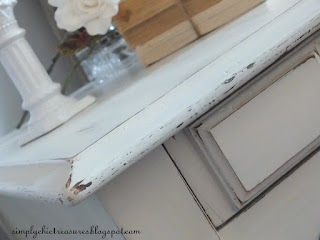 This table had a unique shape too, with the curves on the sides and the top was curved a little at the front, as well. 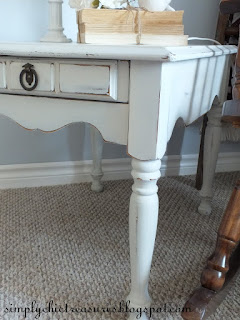 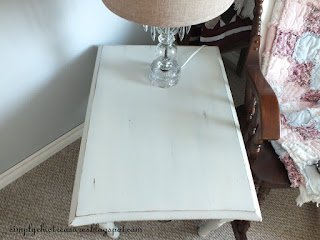 It ended up selling fairly quickly, so I was glad I didn't have to store this one too long!
This second table I think I did in October.  There once was two of them. 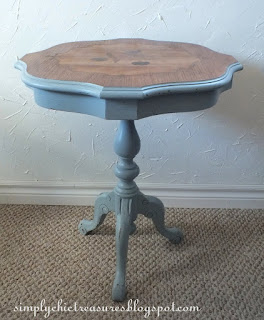 But then, this happened to the other one... 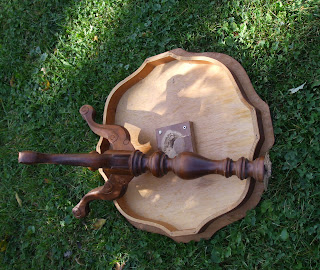 This is what it looked like before snapping in two! 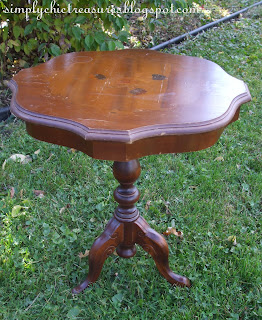 I had set it down on top of some other stuff that was sitting outside, knowing that maybe it was unstable, but not wanting to take the time to fix it. It landed on our gravel, so the top edge was all chewed up, really almost beyond repair.

And so then there was one table. I refinished the top since it was in pretty bad shape. Then I primed the base. But because I was feeling frustrated about the broken table, I switched my plan from a white base to this grey/blue colour... mainly because I had just doubled the cost of it and didn't want to put as much time into it. So, I quickly grabbed my paint and got to work, flipping the base around as I went.  Well, what do you know, but one of those quick flips caught my paint can and I ended up with this mess. I was pretty much left with only a quarter of a brand new quart of paint. Mind you it was an oops can, and I didn't pay full price.. but still! 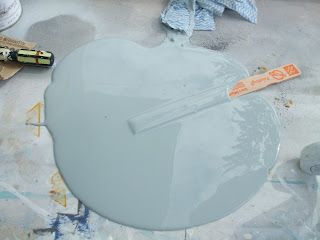 After all that, though, it did turn out nice.  Usually when I refinish a top on piece I do the entire top piece, including the edge, but when the other one fell, I discovered that despite the nice wooden veneer on the top, it was a particleboard base, so I couldn't refinish the edge on this one. 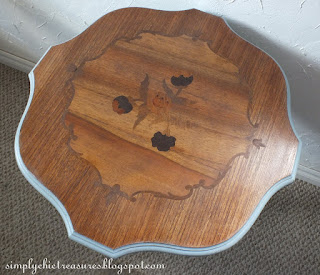 A little bit of distressing... 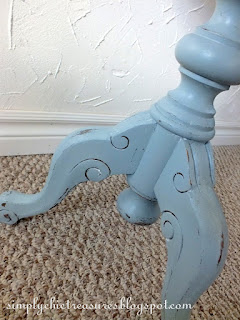 And after all that I ended up still liking it in the end!
Linking to:
Domestically Speaking
Southern Lovely
The Shabby Creek Cottage
The 36th Avenue
My Repurposed Life
Miss Mustard Seed
The Shabby Nest
Tatertots & Jello
Posted by Cynthia at 9:15 PM

Cynthia
Hi Everyone, My name is Cynthia. I am married and am in my mid-20s. We live in Ontario, Canada. I've always had a preference for anything antique or vintagey! Here I will be sharing my furniture makeovers and other craft projects I tackle. Thanks for stopping by. There will be more to come!