This dresser has been a long time in the works.  I rescued  it (seriously!) at the end of September, you can read more about that adventure here. 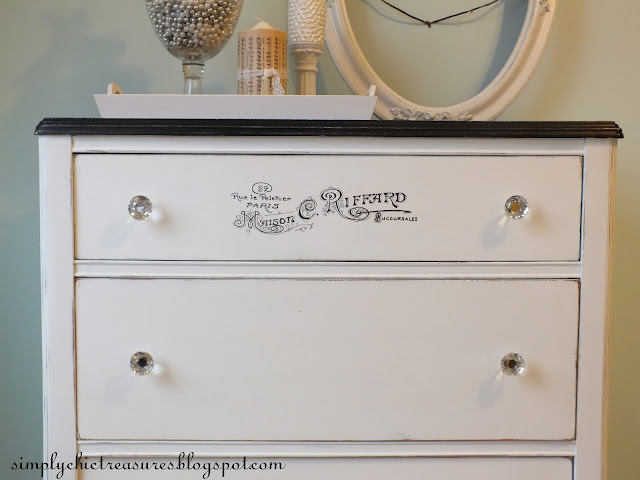 I actually got it painted up pretty quick, it was ready to go at Thanksgiving (Canadian, that is, which was October 8).  However, I wasn't satisfied with the knobs.  To me, they looked like pineapples, and they just seemed too big for the dresser. And besides, who wants pineapples on their dresser? 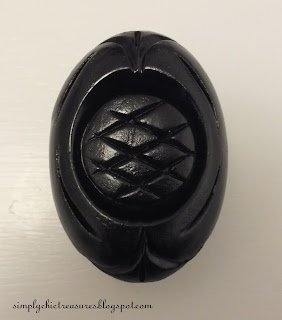 So, I ordered some crystal knobs off of ebay.  Then waited for them to arrive... and then waited some more.  They ended up taking about 5 weeks.

This is how it looked like before I started to work on it: 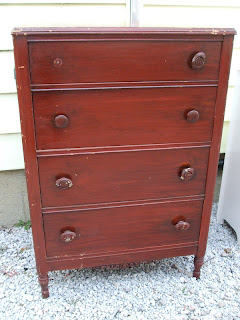 The graphic on the top drawer is courtesy of the Graphics Fairy (where else, right?)
I transferred the graphic using the same method that I used on my french script coffee table, except that this time, I wanted a really crisp image, so I used sharpies. 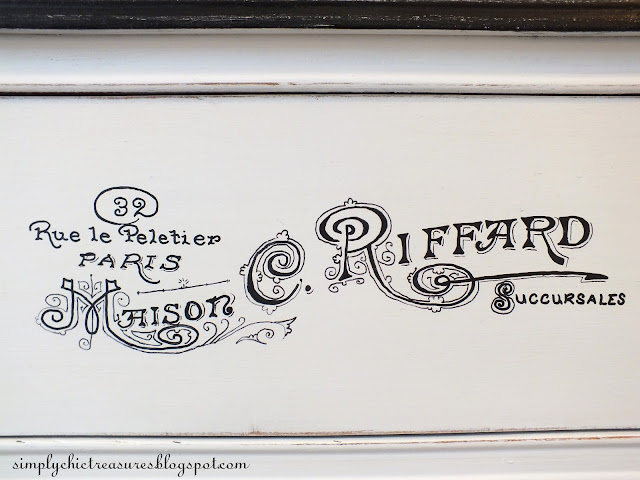 This chest of drawers is fairly simple, but it does have some pretty details. 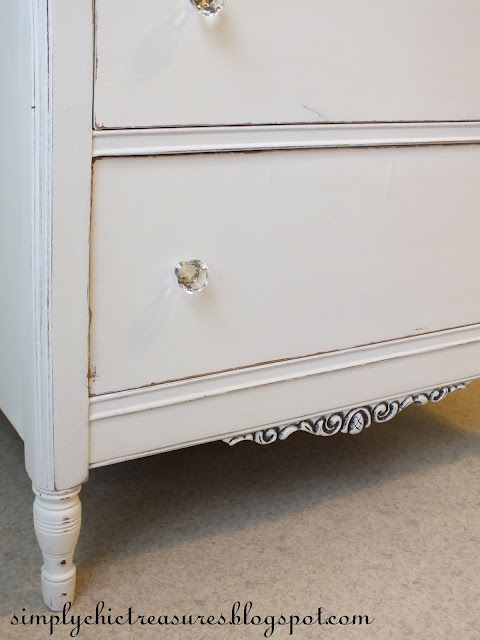 That's technically Christmas wrapping paper in the drawers.  I found it at Canadian Tire, but I think you could get away with using it all year round.  I'm always on the lookout for pretty wrapping and wallpaper to use as drawer liner, I think it adds a nice touch to the finished piece. 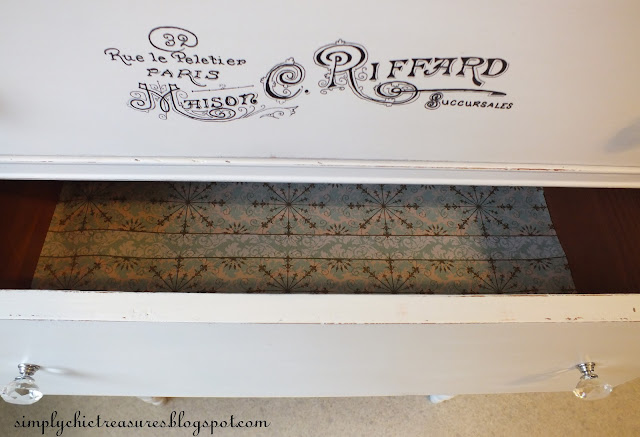 When I took these pictures on Friday, it was overcast, and I was planning on taking more when the sun came out, but I ended up selling it yesterday, and the sun still hasn't come out. 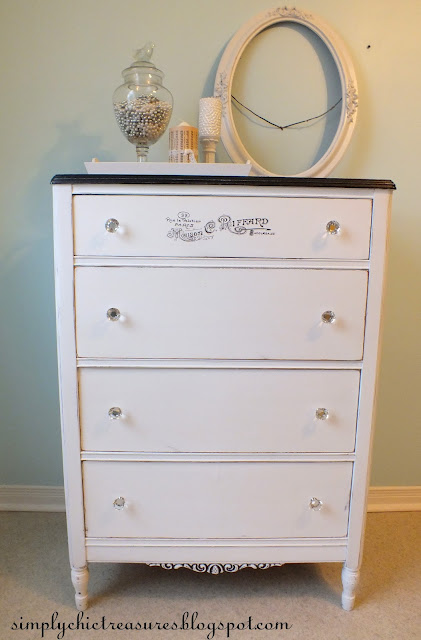 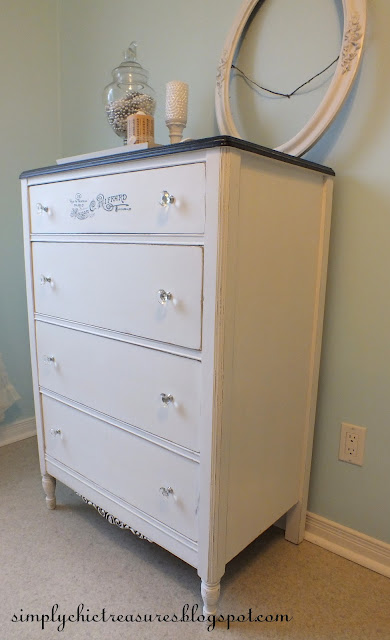 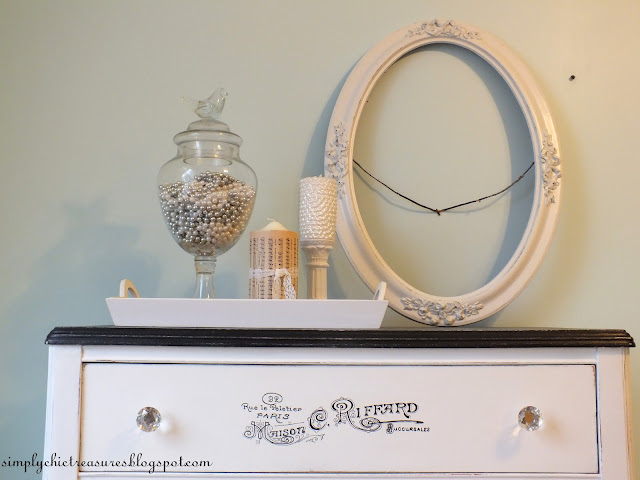 Hope everyone's Christmas prep is going well!  Lately, I've been making a few handmade gifts. I probably shouldn't share them on here though, because who knows who'll be reading this right ?

Many of you have seen those inexpensive cream and red towels that Ikea sells, right?  Well, here's a fun way I gussied up a couple of them for the Christmas season. 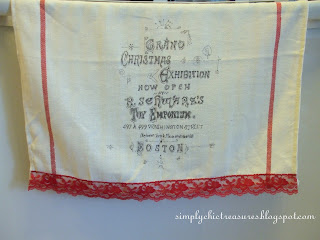 I took a couple of images from the Graphics Fairy (where else, right?), printed them out, taped them to my window, then went over them with a black sharpie.
I think I first encountered this idea over Setting for Four.  Brilliant idea, isn't it? 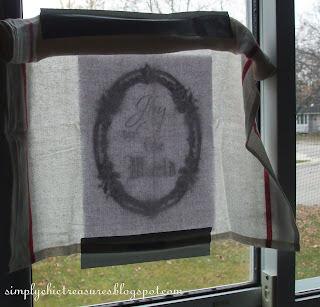 And this is the second one I did.  I thought they still looked a little plain, so I added the red lace to the bottom.  I had bought the lace on a whim at Fabricland the week before because it was buy 1 get 3 free, thinking maybe I would use it wrapping presents, but there ended up being exactly enough for my two tea towels.  I love coincidences like that! 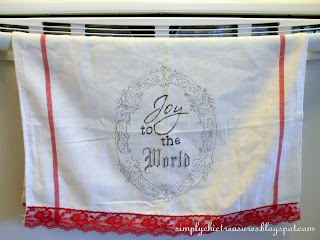 Now I wish I had bought more than two towels the last time I was at Ikea, because these would make awesome gifts. 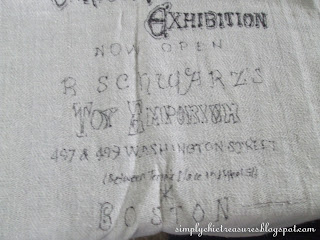 And just so you're not too discouraged with how your tracing looks, this is how mine looked right off the window (above).  Then I went over it again filling in more details as I went by looking at the picture (below). 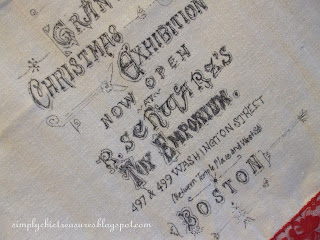 Don't know if it's really possible or not, but perhaps my pretty towels will make drying dishes more fun!

I am just popping in this afternoon to mention that I have added my muslin rag wreath to the etsy shop!  I have had a few requests to sell it, so when I happened on some wreath forms this afternoon, I thought I would give it a go.  So, if you loved my wreath but don't have the time or inclination to make one yourself, they are now available here. 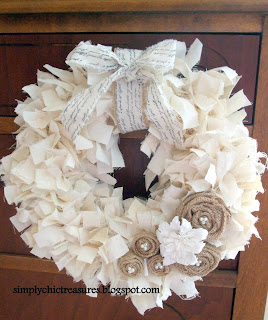 Posted by Cynthia at 2:19 PM No comments:

Cynthia
Hi Everyone, My name is Cynthia. I am married and am in my mid-20s. We live in Ontario, Canada. I've always had a preference for anything antique or vintagey! Here I will be sharing my furniture makeovers and other craft projects I tackle. Thanks for stopping by. There will be more to come!